(The amazing hypothesis that a “Larger SomeThing” — The Human Social Organism — creates human persons, see Dose 7, will be revealed to be composed by a process called “Reflection”.  Persons find themselves ‘reflected’ in the other persons and the living creatures of the world around them.  These results are basic to the Evolutionary Process.  The mechanism of reflection — this feedback loop — will start to be analyzed through a discussion of the codes involved: genetic and linguistic.  “Dose 8”, in “The Meaning of Life, in ten easy doses” series.  REVISED VERSION OF THE EARLIER “Dose 8”.)

“The final advantage for us, as the highly connected humans that compose The Human Social Organism, is the most difficult to explain and the most important.  It concerns the ability of persons to “reflect”.

“What could we possibly mean by “reflect”?   Eventually, we will see that “to reflect” can mean “to be thoughtful.”  But here, initially, all that has been discussed in previous posts, is Persons share the stories of who they are, and receive feedback from those around them.  This feedback is ‘their reflection’, which they ‘see’ in others. This kind of reflection can contribute to a change of story.  A ‘person’ is just that kind of ‘thing’ that participates in this interchange of persons.

“So, personhood is a very unique form of interaction, a kind of ‘hall of mirrors’ and the by-product is not only the formation of self-identities for those involved, but also a collective story, a “manifest image”* of the kind of ‘thing’ a person is.  It should be noted that this reflection is ongoing.  All these individual stories, and the collective story, are constantly under revision.  This is simply to say, we are ‘reflecting ‘ or ‘thinking’ all the time; working on who we are and what is this world we are involved in.

*The American philosopher of science, Wilfred Sellars, originated this phrase and its use has been taken up by Dan Dennett.

I’m not sure why this was hard to say, except that “Thinking”, in this description, has been turned into a social process and not the individual, in-your-own-head activity we usually believe it to be.  Thinking is a kind of social ‘reflectiveness’, if you will; it takes place within the Human Social Organism. It’s the way this organism hangs together and coordinates; and then gets into the individual’s head, your head, my head, as “me”, talking to myself!

“In this way, we are like a flock of Starlings, except it’s persons that are the  units in this social process.  Surprisingly,  human animals become human persons by participating in this extremely social way of living!  So, that is why it was difficult to express; I tried to seriously shift our understanding of a very basic activity — thinking — and a very basic ‘thing’— a person.  Each of these ‘things’ became much more social, and far less individual, than is often thought.”

So, Reflective Thought starts out as an interpersonal exchange, and then this dialogue gets into each individual’s head.  This is why Thinking is like Talking To Yourself; because it is!  Individual humans have instantiated this social process into the interaction of different patterns of their brain.  Thinking IS Talking to Yourself!  (This is Dan Dennett’s contention, see his From Bacteria to Bach and Back, for example. 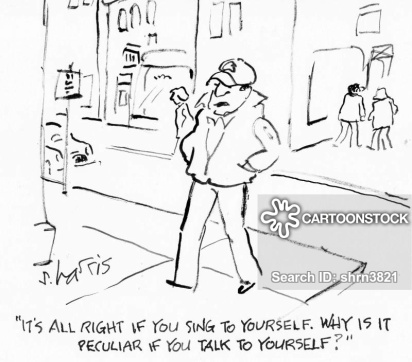 (“Talking to Yourself” gets very little ‘cred’, But is Should!  This dialogue is the basic form of Thought.)

Even physical things, ‘things’ we “take” as in the world independently of us, are a product of our reflective processes.  “Things” do not directly ‘push’ Them-Selves on us.  It is, as if, we are in dialogue even with them and that is why and how their “character” and “ours” have changed through history.  Seemingly paradoxical to some, even Mt. Everest is not a basic reality in the world of physics; it is an emergent phenomena for us, to our point of view!  Even an atom is a little, truncated ‘self’; a point of initiation and an emergent ability that is “useful” to us, and exists for us.  (More on this in later Doses, but also see posts on physicist Sean Carroll’s The Big Picture.)

“What we are doing is unpacking our commonly used word, “reflection”.  It contains two very diverse elements: an act of ‘thinking’ and the process of ‘a rebounded image’.  It’s an awkward association that cries for explanation!  This is similar to the work of analytic philosophers, Richard Rorty and Daniel Dennett.  The significance of this compound meaning has not been lost in the history of philosophy.  From Socrates to John Locke, the “dialogue between persons” and “the reflection of an object” have vied for the meaning of “truth“.

“We should reject the idea that the mind is something inside of us…Consciousness is not something that happens to us.  It is something we do”,    contends U.C. Berkeley, philosopher, Alva Noe.  This is the idea we are exploring.