Coronavirus: not as optimistic an update as I would like.  My initial post on this topic was very positive.  I was proud of my Buckeye state!  This one less so; not because The Virus has gotten out ahead of us, it has not.  What has taken An Ugly Turn is The Political Situation!

People are still Dying!  About 40 to 50 Ohioans a day, and there are over 300 new reported cases statewide.  The prediction models show Ohio as Not really peaking dramatically, but at a very flattened and prolonged ‘curve’, really almost a plateau, at a very much lower rate of confirmed disease than initially thought likely.  All this is good news, except –of course– for almost any amount of illness and death from an epidemic.  But that is Not How Some People are Starting to See It!

On Friday (4/10), my wife and I were disturbed to hear a disruption in the background of our Governor’s and his Chief Medical Officer’s almost daily press conference: Shouting, chanting, loud and angry.  Then Monday (4/13), again shouting and this time a rather plainly audible pounding noise.  And this, at conferences that had been done very calmly, competently, and in a manner that has been emotionally and intellectually reassuring.  We, at home watching, were told Protesters, about 100, were outside the State House here in Columbus.

Protesters were demanding our state be reopened.  They called it “Tyranny” and  contended their rights were being “trampled”.  One even carried an AR-15 perched on his hip!  Others wore Trump hats and Guy Fawkes masks and carried signs, many of them barely legible.  It was a very sad contrast to the profoundly appropriate leadership that was taking place within the Capitol Building.

Upon some research, I found the protesters are affiliated with a pro-gun group, Ohio Stands United, which has now become active around the virus issue.  The woman to the far left in photo (mouth open, short blond hair) was revealed to be a Republican Party candidate for the State Senate, named Melissa Ackison.  Here is a sample of her rhetoric as reported in the Columbus Dispatch:

“In a time where full-on unconstitutional tyranny is on display, the president is doing exactly what the patriots elected him to do, and I knew it was only a matter of time before he would flex his muscle and authority to save Ohio from unprecedented overreach.” (my italics)

“The original model (was flawed) …the president’s condemnation of the World Health Organization’s handling this pandemic (is accurate)…that is all that the public needs to know…We have children to feed, businesses to run, employees to pay, and Ohio must end this shutdown now.”

This kind of thinking  is being increasingly echoed around Ohio recently by some other Republicans, especially ironic since Governor DeWine is himself of that party.  I find it frightening words such as “tyranny” are being bantered about and that these protesters and gun-lovers think of themselves as “the patriots”.  Frightening that they are anxious to see Trump “flex his muscle and authority”.   Sorry, but I can’t hardly keep myself from thinking of them as incipient fascists.

BEATING THE VIRUS BUT NOT DOING SO GOOD POLITICALLY, here in the O–H–I–O.  Hang Tough and Think Clearly!  GWW 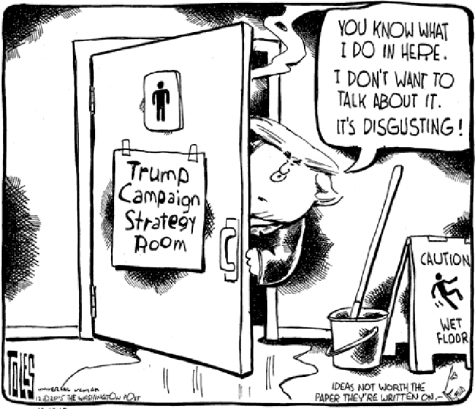