(This is the Second Post in the series, The Big Picture by Sean Carroll.  The initial post explained Carroll’s position that in spite of our understanding of the world as caused, necessary and predetermined, when we act we do so with a belief in our freedom and causal efficacy.  In this post the deep background that underlays human “action” is explored: “Emergence”.  Objects that emerge appear to have abilities and properties significantly different from the objects that exist in the vocabulary of physics.  They appear to be “more complex” and with interesting “structures” and this seems to be at odds with The Second Law of Thermodynamics.  First published in 11/17/2019)

In a universe that is running down, how do complicated things appear and persist?  “Complicated” in the sense of designed.  “Designed” in the sense of put together in a way  that does not seem accidental, in a way that seems similar to how we put together an artifact — to serve a purpose.   And “appear”, as in “complicated things appear”, and that is a good word, because it leaves open the possibility that things that are that tightly organized, things that serve a purpose, things whose parts then also ‘serve’ a purpose in light of their object’s larger purpose, are only “an illusion” in some sense, a ‘mere’ appearance.  That is the position of physicist Sean Carroll, in his book The Big Picture.  He contends ‘highly organized things’ are both real and not so real at the same time.  Only the objects of physics are “fundamental”; they are “the world at the deepest level.”(1)

“In the Far Future”

But it’s even worse than that.  In the biggest process of all, The Universe, things are ‘running down’, not ‘building up’.  Entropy is increasing and that is often thought of

as “disorder” and “randomness”, and that is the opposite (it seems) of high organization and significant design.(3)  So, entropy is very high and this is Second Law of Thermodynamics which predicts ‘heat death’.  “In the far future….the universe will appear cold and empty,” Carroll says, “all the matter and radiation we currently see will have left our observable horizon, diluted away by the expansion of space.”  It will be very “simple”, very “smooth”, one area of the universe will be no different than any other.(4)

And Carroll continues: “At early times, near the Big Bang... the state (of the universe) is also extremely simple:  It’s hot, dense, smooth, and rapidly expanding”, he says.  One area of the universe is like all the others.(5)  But here, entropy is very low.  This state of the U should not be thought of as disorderly or random.  So, how could entropy be so different, early to late, when so much about the two situations is similar?  One is hot and full, the other is cold and empty but both are simple and “smooth”.

The answer seems to be, according to Carroll, that there are two kinds of “simple”, and this will help clarify what is “complex” because complexity arises as the universe moves from one kind of simple to the other.  And this initial simplicity, to my mind, can only be thought of as if a single unit, a singularity though Carroll does not use that tern

Carroll tells us that “our intuition is a bit off” when we think of simplicity as high entropy (highly random and disorganized) — like a pile of sand, and when we think of complexity as low entropy (highly organized and not random) — like my good old pet dog.(6)   Actually, simplicity can appear to us as both low and high entropy.   Carroll’s favorite example of this is coffee with cream and it’s one that he is researching professionally.

Complexity arises as the universe evolves from one kind of simple to the other.

It was Ludwig Boltzmann who started a shift in thinking about entropy in about 1875.  He “explained it” in a new way, says Carroll: Entropy is “a way of counting how many possible microscopic arrangements of the stuff in a system would look indistinguishable from a macroscopic point of view.”(7)   The difference between the microscopic and the macroscopic has been a key issue here at NatieRel, and Boltzmann brought the concept of entropy into the middle of it.  Entropy no longer casts doubt on the existence of the Complex (the macro).   The complex presupposes entropy and helps clarify what it is in light of the micro!  That is what I believe Carroll is saying. 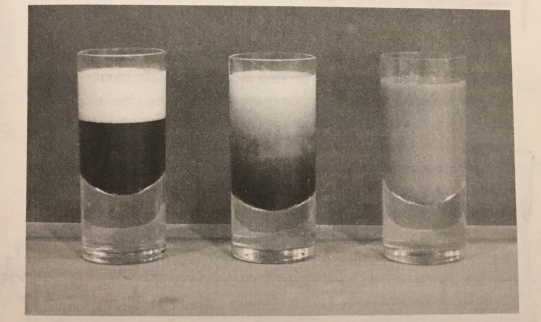 In Carroll’s coffee and cream example, on the left (above) the cream is gently poured in to sit on top of the coffee.(8)  On the right, the coffee and cream are thoroughly mixed.  Carroll’s point is that each appear simple in Boltzmann’s terms; each appears simple from a macroscopic point of view.   Yet, the one with the cream carefully sitting on top is low entropy in comparison to the very mixed.  Significantly fewer possible arrangements of coffee and cream molecules can be in the one at left than the possible arrangements in the very mixed at the right.  A simple appearance can be the expression of both high and low entropy.

It is in comparison to both of these that Complexity, with its entropy

dramatically low, is evident.  The middle state is coffee and cream in the process mixing or moving toward an even dispersion.  Here, “in between low and high entropy, (is) where things look complex …. Tendrils of cream reach into the coffee in intricate and beautiful ways”, writes Carroll.(9)  It is in this kind of intricacy that there are relatively very few possible molecular arrangements and for which complexity is an apparent and appropriate description.

“Between the Far Past and the Far Future”

So, Carroll’s point is that in the coffee mixing case, “Entropy has gone up throughout the process, just as the second law would lead us to expect.”  “But complexity first goes up, then goes down,” he says, “it’s the intermediate stage…where things look complex.”  “It is today, in between the far past and the far future, when the universe is medium-entropy but highly complex…(that) The initially smooth configuration has become increasingly lumpy…as tiny perturbations in the density of matter have grown into planets, stars and galaxies.”(Carroll)(10)  And much more.

In the following posts in this series on The Big Picture, Carroll’s ‘views’ on the mechanisms of the Growing Complexity on dear old Planet Earth will be explored.  Stay tuned, Comrades!