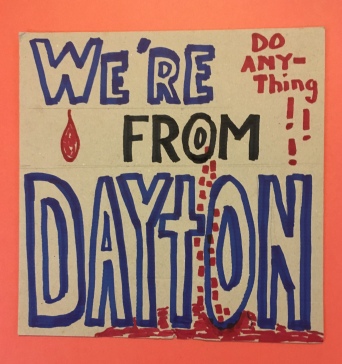 We’re from Dayton!  On Saturday night, a gunman walked the street of a popular entertainment area in Dayton.  In 24 seconds of shooting, he killed 9 people and wounded 26.  In 24 seconds!  How is that possible?  See the picture of the gun below and how it was equipped.

Here at naturereligionconnection, my wife and I both grew up in Dayton and lived there somewhat as adults.  We still have very close friends and family there.  Sunday morning I was already upset by the mass shooting in El Paso, Texas, in which 20 people were killed and 27 wounded.  My wife called, she told me of Dayton; it was like getting punched in the stomach.  Two mass shootings in 13 hours and “We’re from Dayton!”

Know as the birthplace of aviation, the Wight brothers lived there and built their first powdered aircraft.  Later it was the headquarters of NCR (National Cash Register), and as a child I remember riding along Patterson Ave. which was lined on both sides with six story red brick building with large windows all filled with machinists building cash registers for the world.   But that was then, and now NCR has moved away and so have all the auto plants.

When I began to write this blog, I said that it was Not going to include politics, even though my wife and I are very involved in it.  This is an exception!  I will not sit quietly as this carnage continues.  Anti gun-violence has always been a cause of ours, and our yard is often ‘graced’ with various political signs including gun violence signs.  The sign at the top of this blog is now nailed to our tree facing facing the street.

This morning I have already called 3 elected officials, all Republicans, and appealed to their best instincts; well, in 2 of those cases there may be some ‘best instincts’, to the third, I simply threatened to work till I drop to see him defeated unless he do something to limit gun access.

This summer so far, here in Columbus, there have been at least 4 shooting deaths of teens by teens.  In our state, an assault rifle can be purchased by an 18 year-old but that 18 year-old can’t buy a beer!

Yesterday, when I was so frustrated and angered upon hearing of the shooting in Dayton, I tried to call my best friend there to commiserate with him.  He was not available so I left a message expressing my outrage and sadness.  But shortly thereafter, I realized, what if he is Not OK; what if he or his wife is among the dead or injured?  I called right back, for they often frequent that area of dear old Dayton that was so violated, and this time he answered.  As shaken and angry as I, and more so, they were fine and they had been there, to that district, the night before!  Life is too precious and short already, this violence cannot go on.

Some say, “But what can stop it?”  I say, let us do any reasonable thing, any reasonable SIX things, and see if it helps.  Red Flag laws, universal background checks, raising the age for purchase, banning enlarged magazines, ending concealed carry, increased mental health services, required safe storage, BANNING ARs —– anything that limits guns and their abuse.  And even if, after this, the violence is not greatly diminished, at least we will be able to say:  WE ARE NOT A PART OF IT, WE TRIED.

Please, Do Something NOW, Help End Gun Violence in America!!!