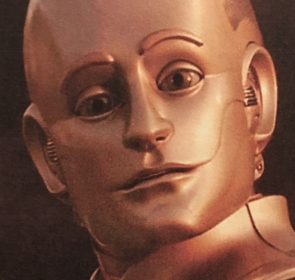 (This is the Second Post in a series on Freedom and Mother Nature.  In the first post of this series, Haunted by the Idea, the “self” was given  an exulted status by the famous Existentialists; it “transcended” ordinary causes and mundane formative powers, so that ‘it’ could freely —“radically” — choose.  In this piece, choice will be brought back down to earth, and eventually Mother Nature will be accorded a proper role in this central but baffling (at least to a few of us) human activity of choosing.  What is it to Choose, and how can Nature help us do so?  Spoiler: the baseball game example is highly suggestive!  First published 11/06/2018)

“Free Will or Free Won’t?”  This question was recently asked by a leading neuroscientist.  His preference was the latter, “free won’t”.  So, Free Choice?  It’s an illusion, he believes!

This scientist’s conclusions are not only plausible but maybe even preferable, and modern technology, the latest science and some highly innovative philosophy are moving in that direction. Theories, such as these, embed us in our environment and our brain’s neurological organization.*  The following is an example of what a Naturalistic Theory of the Mind (and brain) might look like and how it would be an improvement over our current ideas of The Self which are often infected with mythical elements.

impulse and stimuli (data), and then ‘decide’: react as programmed to the dominant input.  The illusion of choice is created by the rejection of lesser input.  So, its “free won’t:  I won’t do this or that or that…”, but not “free will” because my brain, or “I”, just goes along with the largest impulse or most prominent data.  I’m caused to do it!  Free choice is an illusion.

This illusion is amplified by the really close cases, where our brain may be designed to pause and wait for tie-breaking input, or with the necessity to act rapidly, our brain just randomly chooses one or the other option, as if flipping a coin.  “Science takes us inside things, and the inner, detailed view of our brains that science provides is not likely to reveal to us any recognizable…res cogitans or ’thinking thing’ we know so well by introspection,” contends Daniel Dennett, one of today’s leading philosophers and cognitive theorists.

This kind of theory thoroughly embeds us in our environment and our brain’s behavioral design.  We are like a computer ready to run a variety of programs.  So, maybe the crux of the issue of freedom should not lie in choosing between this or that relatively ordinary act.  Choosing one out of several standard possibilities is a kind of freedom, but no more complex or sophisticated than the ‘freedom’ of a bird to ‘choose’ to fly from this tree to that, to sing now or in ten seconds from now.  Consider, further, the following example.

* “Our mind and its underlying infrastructure (the brain) has an inherited structure provided by the history of our species interaction with the environment.  The idea of a ‘blank slate’ — our mind having no initial structure, a tabula rosa— is no longer an accepted theory.” (D. Dennett, Elbow Room, 1984)

“I was Going to Be Hit, but then I Ducked”

You are at a baseball game* and a foul ball comes screeching off the bat.  You are not at the moment looking, you are sipping your beer, but with your peripheral vision you see a glimpse of the ball coming at you, and duck.  You say, “I would have been hit, but I ducked.”  You changed what was going to happen, you think.  You feel free and effective.

But you were designed to duck, it’s automatic.  You were never “going to be hit;” that was a determined outcome, says Dennett.  You changed nothing. You incorrectly attributed to yourself a history-changing freedom.  We tend to give ourselves too much credit, as if it were an option to duck.  In reality, you were never going to be hit because even the seeing “a glimpse of the  ball” was part of the reflex; its heightened sensitivity to rapid movements that would endanger your head.  And this new way of looking at it is not a bad thing.   After all, you still didn’t get plunked on the head even if you don’t feel as free, ‘free’ in the sense of “I chose to do it” and “I could have done otherwise.”

This new way of considering this situation more deeply embeds us in Nature: we are Her designed machines.  Our behavior and its outcome are determined and predictable, though a little more convoluted than many other objects in nature.  We are truly a part of Nature and the universe, with no mystical power of “radical choice.”

What other behaviors of ours might be similar?  The ducking reflex is a very clear example, but research and theorizing have now advanced and include such complex behaviors as language acquisition and pattern recognition as significantly instinctive — designed-in — behavior.  We tend to take great pride in these abilities and often tend to think of them as setting us apart from the rest of Nature not identifying us with Nature, as seems to be the case!

In Haunted by the Idea, we considered freedom and choice to be extraordinary abilities.  They derive from a mysterious condition in which our ‘true selves’ exist very independently, as if floating free of wants and necessities.  An example, would be the choice of a mother, in the midst of famine, declining to eat so that her children could.  She rose above, and did what was right and noble!

Could that same example be explained naturally?  Traditionally, this behavior would have been thought of as a kind of divine intervention, an act “selfless” in its denial of the mother’s own individual interests.  But now, biologists have an explanation in terms of self-interest for at least some of these altruistic acts.  From the point of view of Mother Nature and Her interest in the preservation of genes in a lineage, the famous British biologist, J.B.S. Haldane, once quipped, when asked if he would give up his life to save a brother, “No, but I would save two brothers or eight cousins.”  And Nature is inventive enough to have discovered mechanisms to assure such brotherly (and motherly) good behavior and thereby assure the greatest number of family genes move into the future!

Now you may think, “That doesn’t get us very far!  What about ‘just’ one brother, or saving ‘only’ one child or ‘just’ seven cousins!  Well, scientific Game Theory can be

suggestive concerning further “ethical ” issues.  It explains how some animals have come to establish territories, mark them, and generally respect the boundary territories of their competitors and thus avoid violence.  To be constantly fighting over territory with neighbors who are closely matched physically, is mutually destructive.  Mother Nature’s evolutionary process has hit upon this “territories” solution.  In World War I, the same explanation has been applied to the short-term impromptu cease-fires that occurred along the stalemated Western Front. Soldiers in the trenches on each side stopped fighting, ritually maintained their opposition, and even celebrated Christmas together, much to the frustration of their generals.** 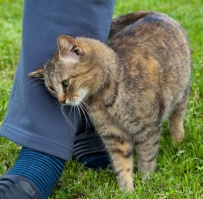 A cat rubbing against you is more than a sign of affection.  With its scent glands in the face, it is marking you as part of  its territory or group.

So, maybe, we are ‘just’ fancy, designed, biological machines; and, maybe, that isn’t so bad.  The universe, and our world in it, just might be set up to assure us some significant successes!

Can a Machine be Designed to be Free?

If a computer is designed to consider, and reconsider, its own program and behavior, why could it not be considered free?  Dennett shows us that computers are now designed “to learn.”  They write new music and play new games of chess based on being given the basic rules of music and chess, some paradigmatic examples and the ability to accumulate the experiences of their past attempts.  This lays out the route to understand our own ‘Freedom’!

In the next posts on freedom, we will find that Nature has discovered incredibly complex, even “advanced” (implying ‘qualitatively’ improved) forms of cooperation.  In that post, Persons, ‘Large’ and ‘Small’, we will start to try to understand the transition from humans as animals to humans as Persons.  It’s by understanding this difference that we may come to understand more about altruistic and cooperative behavior, and that our freedom is based more on working together, than in making dramatic individual decisions.  Also, a sociological door will be opened to envision our ability to reflect on our own behavior.

**See the noted book: The Evolution of Cooperation, by Robert Axelrod